To share your memory on the wall of Jean McKee, sign in using one of the following options:

Print
Anna Jean (Hutchens) McKee passed away on Sunday, August 30, 2020 at the hospice in Sturgis, SD, surrounded by her loving family members. Although her first name was Anna, she preferred Jean and was always called Jean by her family and friends.
... Read More
Anna Jean (Hutchens) McKee passed away on Sunday, August 30, 2020 at the hospice in Sturgis, SD, surrounded by her loving family members. Although her first name was Anna, she preferred Jean and was always called Jean by her family and friends.
Jean was born December 31, 1926 to Vere and Maymie Hutchens on the family farm near Wood, SD. Her grandmother, Anna Laytteyer Shepard Noggles, helped deliver her. She joined her brother, James, and later would be followed by three sisters, Ruby, Anita, and Betty. She lived on the farm with her family until her father's death. When her brother took over the farm, she moved with her mother and sisters to Wood.
Jean graduated from Wood High School in 1944, and that summer her dad drove her to Spearfish to attend a six-week teaching course. She later returned to Black Hills State to continue her education and received her Bachelor’s degree in 1973. Jean taught school for over 40 years. She taught in rural schools and ended her career with the Meade County School District. During her teaching career, she taught many of her nieces and nephews, and later her daughter, Joyce. Jean's family was recognized by Black Hills State as the Legacy Family in 2016, and awarded the Anna Jean Hutchens McKee Legacy Family. Over 40 members of the family attended or graduated from Black Hills State, and Jean was very proud of this accomplishment.
Jean married Robert McKee “Bob” on September 30, 1947, in York, NE, and the two remained happily married until Bob died in January 1982. To this union were born two sons, Robert and Kenneth, and two daughters, Connie and Joyce. The couple moved from Wood to Igloo, SD, where Bob worked at the Army Depot and Jean interrupted her teaching career to be a full-time mother to her children. This was Jean's first home that had running water and inside plumbing. The couple stayed close to their families by making weekend trips back to White River and Wood, SD. The family moved from Igloo to Edgemont to buy their first house. When the Army base closed, they relocated to Jordan, MT for one year and then settled in Sturgis, SD.
Jean loved her family and was a wonderful mother. She loved celebrating holidays, birthdays, and anniversaries with her family. Christmas was a special holiday for her as she made sure that every family member who lived close by received a Christmas present. The Christmas tree was overflowing with presents, including a Santa present for each of her children, grandchildren, and great-grandchildren. Christmas Eve was a time for the entire family to gather and enjoy all of her homemade cookies, candy, and fruit cake.
When Jean married into the McKee family, she immediately became part of a very large family and she extremely enjoyed being part of that family. She always found time to visit her brother and sisters and also all of Bob's side. Jean was the last surviving member of her generation in the McKee family. Jean always looked forward to the annual McKee family reunion. She will be greatly missed at these annual family gatherings.
Jean devoted herself to her family. Jean found great joy in attending every activity that her children, grandchildren, and great-grandchildren participated in. Jean loved to travel, was an accomplished painter - with every family member having at least one of her paintings hanging in their homes - and Jean greatly enjoyed her trips to the casinos. Jean was a member of the Black Hills Art Association, Eastern Star, and Black Hills Retired Teachers Association.
She leaves behind, to treasure her memory, her sons, Bill (Cherie) McKee and Ken McKee; her daughters, Connie (Steve) Sulzbach and Joyce (Dick) Schieffer; her sisters, Anita (Dale) Becker and Betty Glaser; her brother-in-law, Bill Oakley; grandchildren, Jason, Bob, Mandy, Katy, Bryan, Angie, Dawn, Anna, Beth, Chrissy, and Kelly; and great-grandchildren, Jackson, Danae, Ethan, Lexi, Landon, Lainey, Jasper, Oscar, Madelyn, Lillian, James, Brooklyn, Emma, and Olivia.
Jean was preceded in death by her father and mother; her husband, Bob McKee; her brother, James Hutchens; sister-in-law, Maxine Hutchens; her sister, Ruby Oakley; and daughter-in-law, Geraldene McKee.
Visitation will be held from 5:00 p.m. to 7:00 p.m. on Thursday, September 3, 2020, at Kinkade Funeral Chapel, Sturgis, SD.
Memorial services will be announced at a later date.
The family requests any donations be made on Jean’s behalf to the Black Hills Art Association, Sturgis Hospice, or Meals on Wheels.
Read Less

To send flowers to the family or plant a tree in memory of Jean McKee, please visit our Heartfelt Sympathies Store.

Receive notifications about information and event scheduling for Jean McKee

We encourage you to share your most beloved memories of Jean McKee here, so that the family and other loved ones can always see it. You can upload cherished photographs, or share your favorite stories, and can even comment on those shared by others.

Posted Sep 03, 2020 at 09:29pm
I'm so sorry for your loss Joyce and family,
I remember her helping out in your classroom at Francis case with my kids and girl scouts also. She will be sorely missed. May your memories help you thru the loss of your mom. My prayers and thoughts are with you.
Comment Share
Share via:
ZW 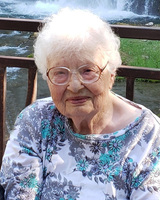