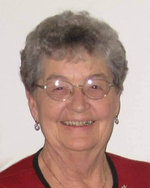 Ardeth Joy (Conger) Hunt was born October 28, 1932, in Faith, SD, to Troy “Bun” and Betty (McGinnis) Conger. She moved with her family to Sturgis in 1946, where she attended school and graduated from Sturgis in 1951.
She met her future husband, Bernard “Bud” Hunt, and they were married in June of 1951. They lived in many different states, as Bud made a career in the U.S. Air Force. Bud passed in January of 2008. Ardeth moved to Sioux falls with her granddaughter, Ashlyn, in 2018. She was an active member of the VFW Auxiliary and held many different offices in local, district, and state. Ardeth was also a member of St. Francis of Assisi Catholic Church in Sturgis.
Ardeth Hunt, 87, of Sioux Falls, died Wednesday, February 12, 2020, at Ava’s House in Sioux Falls.
She is survived by two daughters, Michelle (Richard) Marsh of Sturgis, and Teresa Amaya of Missoula, MT; grandchildren, Jason (Deidrea) Hunt of New York, Ashlyn Collins (Joaquin) of Sioux Falls, Connor (Janine) Jacobs of Germany, and Michael (Samantha) Jacobs of Sioux Falls; eight great-grandchildren, Jonas, Paisley, Noa, Ronan, Amilia, Mikhail, Carl, and Henry; two sisters, Jackie Dale and Angela (John) Ross, both of Sturgis; a brother-in-law, Pat Hunt of Washington; and several nieces and nephews.
Ardeth was preceded in death by her husband, Bud; her parents, Bun and Betty; a grandson, Carl “Jeff” Faber; a brother, Albert Conger; and two sisters, Lavonne Clark and Ginger Koster.
Visitation will be from 5:00 p.m. to 7:00 p.m., with a Rosary beginning at 7:00 p.m., on Tuesday, February 18, at Kinkade Funeral Chapel in Sturgis.
Mass of Christian burial will be at 10:00 a.m. on Wednesday, February 19, 2020, at St. Francis of Assisi Catholic Church in Sturgis with Father Timothy Castor officiating. Committal services will follow at Black Hills National Cemetery.