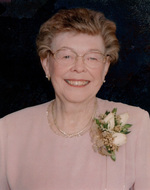 Bonnie Jean Morris was born August 13, 1931, in Hill City, SD. She was the daughter of Ray and Rose (Smith) Morris. She grew up attending the Hill City schools and attended Yankton College and Nebraska State Teacher’s college at Chadron.
On Easter Sunday, March 25, 1951, Bonnie married John B. Petersen at the Little White Church in Hill City. When John passed away in February 2011, they had been married almost sixty years. To this union, five children were born.
Bonnie and John moved to Sturgis in August of 1953. After her children began going through school, Bonnie went back to college nights and summers to get her teaching degree. Her entire teaching career of 32 years was spent in the Meade School District, where she taught only two grades-third and fourth. Her first sixteen years in the District were spent teaching in her beloved Erskine Building teaching fourth graders. The next six years found her teaching third graders in the Primary Building. She then moved to the newly built Bear Butte School where she taught third and fourth graders during the last ten years of her career. Bonnie loved teaching children. Her greatest joy in life was reading about or hearing from her students from past years. She was always proud of their accomplishments in life. One of her fondest memories that would bring tears to her eyes involved her students planning, organizing, and preparing her birthday party, all because she had a summer birthday and never got to celebrate at school. She loved teaching with her daughter, Jan, and many happy memories were made as they worked together for many years before she retired from teaching in the spring of 1997. She then volunteered in Jan’s classroom, doing fun craft activities and helping struggling readers learn to read. She was always so proud of her teaching career and the difference she had made in her students’ lives. She had a great love for quilting and spent many hours at her sewing machine. She was very proud of the quilts that she had made for each of her children and grandchildren.
Bonnie was very honored to be selected Teacher-of-the Year for Meade School District in 1985. She served on many curriculum committees while in the Meade School District. She served the Meade Education Association as treasurer and also served on the negotiating committee. She had many responsibilities in the district such as being a summer school teacher, building head, and grade leader. She was a member of the First Presbyterian Church. She loved being a member of the bell choir and served as a Deacon. She was a past queen of Daughters of the Nile and a fifty-year member of the Order of Eastern Star where she was a past matron. She was a member of the Sturgis Federated Women’s Literary Club and Delta Kappa Gamma.
Bonnie Jean Petersen, died at the age of 89 on August 15, 2020, at her home in Boulder Canyon.
The most important love of Bonnie’s life was her family. Grateful for having shared her life are her daughter, Jan (Darrell) Steffes, Vale; two sons, Robert, Sturgis, and David (Rachel) Rapid City; daughter-in-law, Kalina Petersen, Gillette, WY; grandchildren, Nikki (Alfred) Hansen, Dickinson, Kristi Steffes, Vale, John Petersen, Rapid City, and Matthew (Liz) Petersen, Gillette, WY; great-grandchildren, Elsie and Hugh Hansen, Hudson and Cohen Petersen, and Bentley Wright, Green City, MO; special nephew, John Talley, Jr., Hill City, and her adoring puppy, Millie.
She was preceded in death by her parents, Ray and Rose Morris; her husband, John; her two sons, John and Dick Petersen; granddaughter, Stephanie Wright; and Muffy, ever faithful dog and companion.
Bonnie was a wonderful mother and grandmother. Attending her grandchildren’s events brought her great joy and she was so very proud of them and all that they have accomplished. She was especially proud that Kristi had chosen to become a teacher and carry on the tradition by becoming a fourth-generation teacher in our family. Bonnie was a very special lady, and we will miss her greatly.
Private family committal services will be Thursday, August 20, at Black Hills National Cemetery. A memorial service will be 2:00 p.m. Saturday, August 22, 2020, at Kinkade Funeral Chapel with Pastor Harold Delbridge officiating.
A memorial has been established.