To share your memory on the wall of Clayton Nels Overland, sign in using one of the following options:

Print
Clayton Nels Overland, 87, Whitewood, SD, rode over the great divide on September 16, 2020.
Clayton was born on December 10, 1932, to Ruth Viola (Phillips) and Freeman Dewey Overland in New Underwood, SD. The eldest son of eight children, ... Read More
Clayton Nels Overland, 87, Whitewood, SD, rode over the great divide on September 16, 2020.
Clayton was born on December 10, 1932, to Ruth Viola (Phillips) and Freeman Dewey Overland in New Underwood, SD. The eldest son of eight children, they homesteaded in Red Owl, SD. Most material goods were limited, but life was rich in the little stone/sod house. Clayton worked on and off the place, going to school through his 8th grade year.
As a young man, he enlisted into the Army in Fort Carson, CO for two years: May of 1953 to May of 1955, and served in the Korean War. He received the National Defense Service Medal, the Korean Service Medal, United Nations Service Medal, and Good Conduct Medal. Following the war, he served in the Army Reserve until 1961.
He was married to June (Moreland) in November of 1957, and to this union three children were born: Carmen, Todd, and Dwight. They lived outside of Sturgis and later moved into Whitewood in 1963. Clayton and his brother, Wayne, owned the Mobil gas station in Whitewood, which still stands today. He worked in the logging industry for many years for Garhart & Pool Timber, and worked in his own saddle shop and horse shoeing for years. June and Clayton divorced in May of 1972. Clayton still resided in Whitewood, SD.
On May 19, 1973, Clayton married Mary Melitta (Taggart) Thompson in Spearfish, SD, adding two more children to the union (Rhonda and Ethan). They lived in Whitewood and owned their own business, Overland Building Supply, until selling out in October of 1996, and then ran Overland Trailer Sales. They moved to Crook City, SD in 1988, after a house fire at their home in Whitewood. Mary passed away on October 3, 2003.
Clayton always enjoyed rodeos. He rode broncs in his early years, loved riding and attending parades, Days of ‘76 always being a favorite, and riding in the Buckaroo, of which he was a lifetime member. He held many offices in the Whitewood Saddle Club, Roping Club, and 4H groups. He was Fire Chief of Whitewood and belonged to the Volunteer Fire Department for years. Clayton was Mayor of Whitewood and also served on the Chamber of Commerce. He was instrumental one year in helping cut and load the Christmas tree to the White House. He loved the holidays, big family dinners, playing cards, fishing, going on drives, and having coffee at the café with all the good ole boys. Mostly though, he just liked people, always willing to visit, give you a smile, and help anyone who needed it. He was so generous and kind and just enjoyed life. He loved a good joke or a good story to tell. Clayton also loved his animals, and had all types through the years, but his favorite was his horse, Rudy, whom he taught many tricks and was enjoyed by all.
He was preceded in death by his parents, Ruth and Freeman Overland; his wife, Mary Melitta Overland; sisters, Doris Bastian and brother-in-law, Merle Bastian, and Shirley Drum and brother-in-law, Zearl Drum; brothers-in-law, Wallace Strong and Melvin Hauser, and stepson-in-law, David Martin.
Clayton is survived by his children, Carmen (Frank) Wurnig, Huntley MT, and their children Kaitlyn Mack and Matthew Wurnig; Todd (Dory) Overland, Whitewood, SD, and their children Casey, Hayden, Chance, and Tate Overland; and Dwight (Kathy) Overland, Athol, ID, and their children, Bridget Hannah and Kyle Overland; stepchildren, Rhonda Martin, Faith, SD, and her children, Jeremiah and Alyssa Martin and Melitta Bohnet; and Ethan (Lisa) Thompson, Boyertown, PA, and their children, Felicia Prichard, Alissa Reid, and Desirae Escott; brothers, Wayne (June) Overland and Jack (Kay) Overland; sisters, Barb (Richard) Isaacs, Norma Hauser, and Pearl Strong; special longtime friend of 70 years, Mary May Isaacs; and numerous great-grandchildren, nieces, nephews, cousins, and many friends.
Visitation will be from 1:00 p.m. to 4:00 p.m. on Sunday, September 20, at Kinkade Funeral Chapel in Sturgis.
Funeral services will be held at 1:00 p.m. on Monday, September 21, 2020 at Kinkade Funeral Chapel with Pastor Calvin Chapman officiating. Burial will follow at Whitewood Cemetery in Whitewood, SD.
Read Less

To send flowers to the family or plant a tree in memory of Clayton Nels Overland, please visit our Heartfelt Sympathies Store.

We encourage you to share your most beloved memories of Clayton Nels Overland here, so that the family and other loved ones can always see it. You can upload cherished photographs, or share your favorite stories, and can even comment on those shared by others.

Posted Sep 23, 2020 at 02:42pm
Prayers to all you "kids" during this sorrow filled time. You will always be "kids" in my memories and heart since I was your babysitter for a few summers in Whitewood. It surely didn't feel like a job, just spending time with some great "kids". Your dad had such a quiet strength and I loved hearing him chuckle on the antics of his "kids'. He was a great guy and a cowboy at heart!
Comment Share
Share via:
SA

Posted Sep 23, 2020 at 10:18am
Carmen and Frank, deepest sympathy to your family on the loss of your Dad and Grandpa. I did mot know him but reading about him sure makes me wish I had. Sue Sperl Ames
Comment Share
Share via:
YA

Your Friends at Adecco

Posted Sep 19, 2020 at 10:44am
My sincere sympathy goes out to the whole family. So sorry to hear of his passing. Faye Mutchler
Comment Share
Share via:
KG

Posted Sep 18, 2020 at 07:33pm
I have so many memories of Clayton. We lived next door to him in Whitewood. He and Mary were great friends to my parents and to us. We rode many trails together and he was always kind and fun. Mom and I loved spending time with him and Rudy!!
Comment Share
Share via: 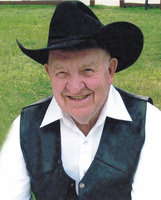 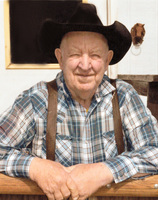 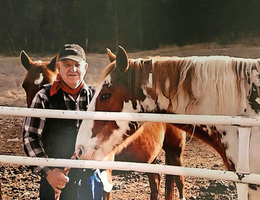 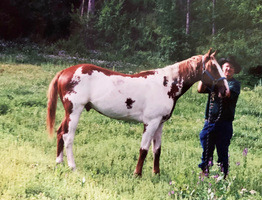