To share your memory on the wall of Dale Herndon Rovere, sign in using one of the following options:

We encourage you to share your most beloved memories of Dale Herndon Rovere here, so that the family and other loved ones can always see it. You can upload cherished photographs, or share your favorite stories, and can even comment on those shared by others.

Posted Jul 01, 2020 at 06:39pm
Everyone should be lucky enough to work for a man like Dale Rovere. During my time at Dale's Tire, I never saw him angry or upset. He was always happy, smiling and contented in his life. Through years of hard work, he had earned the right to come and go as he pleased, but he was always at work each day. He was a special man and a joy to work for and with. Blessings to all of the Rovere family, you have lost a great man. May he rest in peace. Donna Perez
Comment Share
Share via:
MP

Posted Jun 20, 2020 at 04:40pm
Whether while working a few summers at Dale’s Tire or visiting Brennan in the office, I’ll never forget the fond memories of talking with Dale. He was always a gentleman and a vibrant, friendly person. He’s the kind of man who makes an impact on your life in ways you can’t really explain, and don’t really realize until it’s too late to say thank you. He will be missed by so many, myself included, I have no doubt. Condolences to the entire family.
Comment Share
Share via:
BS

Posted Jun 20, 2020 at 01:28pm
My sincere condolences to all the Family of Dale, a remarkable man. My memories go back to those good old days in Deadwood. Then most recently was pleasantly surprised when we reacquainted in Rapid City. I was in awe that he was still working daily and sharp as he recalled many memories. Truly a life to Celebrate!🇺🇸
Comment Share
Share via:
CE

Posted Jun 20, 2020 at 11:08am
We are so sorry to hear about Dale passing. I remember when he had the shop in Deadwood and they would bring tires to my Dad's in Spearfish for the school buses. Then all the time in Rapid though out the years. What a great individual is gone here.
May God be your strength during this time and the memories of this man live in you forever. He will be missed by many. 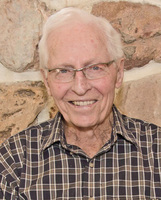