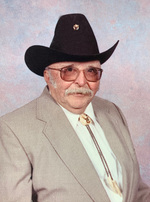 Dean W. Miller, 86, of Sturgis, died on August 30, 2020 after a short stay at the Monument Health Hospital in Rapid City, SD.
Dean was born to Charles and Florence Miller on November 20, 1933 in Sturgis, SD. He was raised in Vale, SD on his parent’s beef farm, where he enjoyed fishing and hunting with his siblings. Dean graduated from Sturgis High School in 1951. After high school, he worked at the Ford Garage and on a dairy farm with his future father-in-law, Glenn Murray. During Dean’s free time, he enjoyed dancing and roller skating with family and friends. He considered joining the Navy, but later decided to work on the family beef farm with his father. Dean married the love of his life, Donna Lee Murray, on May 13, 1956, shortly after they moved to the Miller farm near Vale, SD.
Dean loved tinkering and welding in order to make his work more efficient. He loved playing cribbage and dominos, farming, collecting John Deere tractors, raising his 4 children, and being with family, where he loved telling his many stories. He was a lifetime member of the Western Dakota Antique Club and a member of the Dairy Farmers of America. In 1966, Dean and Donna transitioned the family beef farm to a dairy farm. It was on this farm they raised their 4 kids, lots of chickens, and baby calves. After 42 years, they sold the farm, retired, and settled in Sturgis near Donna’s childhood home.
Survivors include his brother, Ernest of Sturgis, SD; his sons, Norman (Charlene) Miller of Choctaw, OK, Robert (Jene) Miller of Sturgis, SD, and James (Laura) Miller of Sweetwater, TN; his daughter, April (Patrick) McFall of Loveland, CO; and 9 grandchildren.
He was preceded in death by his parents; 4 sisters, Maxine, Anna, Goldie, and Doris “Peggy”; and 2 brothers, Donald and Edwin.
Visitation will be held from 5:00 p.m. to 6:00 p.m. on Friday, September 4, 2020, at Kinkade Funeral Chapel in Sturgis.
Funeral services will be 10:00 a.m. on Saturday, September 5, 2020, at Kinkade Funeral Chapel, with Pastor Larry Reinhold officiating. Inurnment will be at a later date.
In lieu of flowers, please donate to the Rainbow Bible Camp - 14676 Lone Tree Road, Sturgis, SD 57785, or Western Dakota Antique Club -13380 Alkali Road, Sturgis, South Dakota 57785.