To share your memory on the wall of Eldon Herring, sign in using one of the following options:

Print
Eldon Herring—teacher, agronomist, therapist, and patriot from the Greatest Generations—died on July 1, 2020, in Sioux Falls, SD. Eldon was 104.
Eldon Herring was born in 1916, in a prairie dugout on the banks of Mitchell Creek, south... Read More
Eldon Herring—teacher, agronomist, therapist, and patriot from the Greatest Generations—died on July 1, 2020, in Sioux Falls, SD. Eldon was 104.
Eldon Herring was born in 1916, in a prairie dugout on the banks of Mitchell Creek, southeast of Ottumwa, SD. His mother Mathilde Berg, an immigrant homesteader from Ringsaker, Norway, met and married his father Elza Herring, a fellow homesteader. Eldon, his two brothers and two sisters were born and raised on the prairies of South Dakota.
Eldon attended school, first in a one-room school near Ottumwa, then in Phillip for the upper grades. His mother valued education and insisted that the family move to Piedmont so her children could attend high school. Eldon, with his customary wit and a twinkle in his eye, would say, “I graduated high school third in a class of three!”
At great sacrifice, Eldon’s mother made certain her two older boys, Eldon and Emory, attended college. They both went to Southern Normal in Springfield, SD, and both earned teaching certificates. Eldon taught several years at a one-room school in a logging camp in Moon, SD, near Newcastle, WY.
In 1942, Eldon enlisted in the US Army Air Corps, patriotically serving his country during WWII until 1946. He was one of the first airmen to be stationed at Ellsworth AB, SD. Eldon served in all enlisted ranks, graduated from Officer Candidate School (OCS) and earned the rank of 1st Lieutenant.
Also, in 1942, he met a cute redhead named Maxine from Two Bit Canyon near Deadwood. They married in November, had a wedding lunch at the Franklin Hotel and Eldon returned to base. Eldon and Maxine had three children—Shari, Joe, and Della. Maxine died in 1987.
After being discharged from the service, Eldon moved his family to Brookings, SD, to attend South Dakota State College where he received an agronomy degree. He worked as a soil scientist with the Bureau of Reclamation in Huron, SD, and then moved to Sturgis where he worked for the Soil Conservation Service. Eldon was a walking encyclopedia when it came to the landscape and soils of South Dakota. He had been on so many farms and ranches across the state that a trip with him on Hwy 14 was an education for anyone traveling with him. He walked many miles over South Dakota’s farm and ranch land, taking soil samples and then recording his findings on aerial maps. During his journeys across South Dakota, he met farmers and ranchers, many of whom became life-long friends.
Eldon later worked for many years as a Manual Arts Therapist and Supervisor at the Ft. Meade Veterans Hospital planting gardens, growing plants, and maintaining flower beds for the patients and staff. Eldon loved and was very knowledgeable about grasses, plants, and trees.
In 1990, Eldon had the good fortune to meet and marry a sweet and loving teacher from Newell, SD, Mary Huber, who had been recently widowed. They had a wonderful life together, buying a new home, traveling and spending time with family. Mary Herring predeceased Eldon in 2017.
Eldon was always a Norsk Viking, taking great pride in his Norwegian traits and ancestry. He loved his family, giving them his constant help, love, and support. He loved his Grace Lutheran Church. He loved his many friends who enriched his life. He loved the Shriners Hospital for the care they give children with orthopedic conditions, similar to the those his own child required.
Eldon Herring is survived by his three children, Shari Kolbeck, Vermillion, SD, Joe (Ermie) Herring, Waldorf, MD, and Della (Larry) Browning, Brookings, SD; five step-children, Colgan Huber (Patti Weber), Bison, SD, Colette (Rob) Wheeler, Lemmon, SD, Kieran (Carmen) Huber, Rapid City, SD, Creden (Kristie) Huber, Sierra Vista, AZ, and Kenan (Teena) Huber, Spearfish, SD; five grandchildren, Theresa Kolbeck Codrea (Cornel), Thomas Kolbeck, Michael Kolbeck, Emily Browning, and Joseph Browning; nine step-grandchildren, Lyndsey Wheeler, Lucas (Lindsey) Wheeler, Kayden (Ashley) Huber, Kyler (Savannah) Huber, Karlee (Kyle) Dulude, Kensington Huber, Carsten Huber, Kayla Huber, and Tyler Huber; one great-grandchild, William Codrea; and two step-great-grandchildren, Ellie and Averie Wheeler; and three sisters-in law, Helen (Marlowe) Kinkade, Margaret Simon, and Gerry Chaloupka.
Visitation will be 10:30 a.m. to 12:00 p.m. Monday, July 6, 2020, at Kinkade Funeral Chapel in Sturgis.
There will be private family services with committal at Black Hills National Cemetery near Sturgis.
Memorial donations can be made to: Eldon F Herring Scholarship Fund, SDSU Foundation: 815 Medary Ave. Box 525, Brookings, SD 57006 (Reference Eldon Herring's name)
Read Less

To send flowers to the family or plant a tree in memory of Eldon Herring, please visit our Heartfelt Sympathies Store.

Receive notifications about information and event scheduling for Eldon Herring

We encourage you to share your most beloved memories of Eldon Herring here, so that the family and other loved ones can always see it. You can upload cherished photographs, or share your favorite stories, and can even comment on those shared by others.

3 trees were planted in the memory of Eldon Herring

My name is Nancy (Thompson) Harlan and i believe my mother was a teacher in Piedmont High School when Eldon was a student there. Her name was Lois (Engle) Thompson. She was just out of graduate school and came back to her hometown to teach math and German. I am certain Eldon was one of her best students. She loved teaching and valued each student. As an adult, I remember meeting Eldon one summer many years ago. Mother and I were visiting the Deadwood Museum and ran into Eldon and some of his family. Mom and he had such a wonderful visit. This is a memory I have cherished because of the interaction between Mom and one of her own students. I also believe that I went to high school with Shari, Eldon's oldest daughter. Perhaps I was older than she. I remember Eldon as being a very sweet person. I send my sincere sympathy to his family, knowing they have many wonderful memories of their Dad to hold in their hearts forever.
JE

Posted Jul 09, 2020 at 12:20pm
Our sincere sympathies to the family of our most loved patron of the Mission Coffeehouse, especially on chili day!!! He had a smile that was infectious and spirit of gold!
Comment Share
Share via:
DB

Posted Jul 05, 2020 at 05:41pm
Eldon was a wonderful person and we enjoyed many good times together as I worked with Maxine at Ft. Meade Federal Credit Union. He always had a smile and enjoyed visiting with everyone. We delivered meals to he and Mary for quite some time in Sturgis and always enjoyed visiting. He always looked forward to our coming and wanting to know the latest on all the happenings around town. He certainly will be missed. RIP

Posted Jul 03, 2020 at 05:13pm
I’m sorry for your loss. I remember Eldon from his time at Ft Meade in Manual Arts Therapy. He was always a gentleman, kind to everyone and with a pleasant disposition. I think he must have impacted many veterans with his teaching and practical knowledge. Vickie (Johnston) Netterberg
Comment Share
Share via: 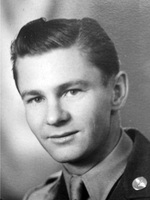 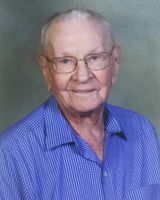 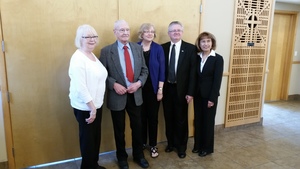