To share your memory on the wall of Eleanor Dore, sign in using one of the following options:

To plant a memorial tree in honor of Eleanor Dore, please visit our Heartfelt Sympathies Store.

There are no events scheduled. You can still show your support by sending flowers directly to the family, or planting a memorial tree in memory of Eleanor Dore.
Plant a Tree

We encourage you to share your most beloved memories of Eleanor Dore here, so that the family and other loved ones can always see it. You can upload cherished photographs, or share your favorite stories, and can even comment on those shared by others.

Posted Mar 28, 2020 at 10:51am
Oh, my..the wonderful and fun memories of this lady..I have so enjoyed reminiscing. I wish I could be there to give you all a hug. May your hearts be comforted by our Heavenly Father's love. For sure,her FAITH and resilience in life was and will be a sustaining example of what Jesus did for her and promises to do for us. She is loved.. I think if she was here today, she'd leave us a note. It would say, "This too, shall pass." That's what she told me, in a hard time, and she's been right, over and over again. Our God is faithful..no matter what. Much love..Rennie 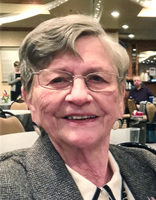