To share your memory on the wall of Irma J. Kietzke, sign in using one of the following options:

Provide comfort for the family by sending flowers or planting a tree in memory of Irma J. Kietzke

Provide comfort for the family by sending flowers or planting a tree in memory of Irma J. Kietzke


In Irma’s words, she always desired to be remembered for her honesty. She left a message for her family and friends, asking everyone to “be good, and be healthy and honest”. As she always did, she thought only of the well-being, happiness, and health of her loved ones up until the very end. We think the best way to honor her, is to carry these words with us, and strive to live as honestly and happily as she did.
Read Less

To send flowers to the family or plant a tree in memory of Irma J. Kietzke, please visit our Heartfelt Sympathies Store.

We encourage you to share your most beloved memories of Irma J. Kietzke here, so that the family and other loved ones can always see it. You can upload cherished photographs, or share your favorite stories, and can even comment on those shared by others.

Posted May 11, 2020 at 04:56pm
We are sad to hear of the passing of Irma. Although we never met in person, we visited by phone and mail. Her family homesteaded northeast of Newell. She wrote a short story of her life in the Newell area which is in the Newell Centennial book. Yes, she was a "spunky gal" and enjoyed sharing history. With sympathy to her family.
Comment Share
Share via: 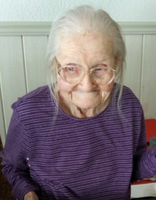