To share your memory on the wall of Dr. Jack Allen Anderson, sign in using one of the following options:

Provide comfort for the family by sending flowers or planting a tree in memory of Dr. Jack Allen Anderson

Provide comfort for the family by sending flowers or planting a tree in memory of Dr. Jack Allen Anderson

Print
Dr Jack graduated from Palmer College of Chiropractic in Davenport, Iowa where he earned his Doctor of Chiropractic (D.C.) Degree in 1978. He met Renee, his first wife, while in college. That same year of graduation they both married and moved to Lo... Read More
Dr Jack graduated from Palmer College of Chiropractic in Davenport, Iowa where he earned his Doctor of Chiropractic (D.C.) Degree in 1978. He met Renee, his first wife, while in college. That same year of graduation they both married and moved to Loveland, Colorado, where Jack started Anderson Chiropractic. He poured his blood, sweat, and tears literally into that practice and worked overtime plus. As all who have known him, his favorite part was the patients and just people in general. The books/office work was managed by his wife, Renee and others. Jack was very respected in the community and kept that business growing for 33 years to finally retire in 2011. Renee passed away after almost 30 years of marriage in March 2008. Their family was very active in Resurrection Fellowship Church under the leadership at that time of Pastor John Stocker.
Jack had a very heartfelt, deep connection of care and concern for his patients as well as anyone he came across. He literally would walk straight up into an open garage door and start talking to a complete stranger. No one was treated as a stranger to him! No one! He took 3 hours at the grocery store and 3 hours to "workout" (his mouth) and managed to stay very fit and very active! All remember him for his wit, his humor, his compassion, his strength, his determination, his amazing work ethic, the love he always held for his family and friends, and of course his looks. He turned heads wherever he went! He and Renee brought their family up on Horseshoe Lake in Loveland with all of the water activities as well as many extreme snowmobiling memories in the off season. In October 1995, he even managed to shoot what still holds the Boone and Crockett record for the largest Shiras Moose in Colorado! It was chosen to be displayed at Scheels in Johnstown, Colorado for a whole year when they first opened. He left quite the legacy of memories for his family and all who loved him! He made time for everyone and was on the phone or stopping by to chat half the day connecting to all of his friends. For those tabulating time left in his day and then adding the early morning hours he would be seen at 5:30 A.M. washing his car or blowing off the driveway on that good ole' County Road 11C; he didn't sleep much! He sure loved his 15-minute naps though like his father, Wally.
In May of 2015, he married Lori and started what he called Chapter 2. Lori was welcomed on the lake and in their family home with many shared activities and memories. Friends and family on both sides grew to receive the two as a beautiful love story. Jack and Lori moved to Spearfish, SD, in June of 2019. Jack titled it Chapter 3, especially when his disease started taking him. On his birthday that year he had to make a decision to give up a 2-wheeled motorcycle, as he said, he had "precious cargo" on the back. He bought a trike, even though he always said he would never ride a trike. It gave them some more time for enjoying life. Jack said many times that God placed him and Lori in the exact place He wanted them to be. Between the neighborhood and the friends with open "garages" and the family that connected there, Jack spent his last month's knowing he was very loved, he will be missed, but truly remembered. All Prayed with him and wished him well. The new neighborhood and many family and friends promised to take care of His Lori.
Dr Jack Allen Anderson, AKA Dr Jack, Captain Jack, Papa Jack, Grampa Jacko died at rest at home in Spearfish, SD, on September 23, 2020, at 7:10 A.M. at the young age of 65. He was diagnosed in July 2017, with Parkinson's Disease. He knew in a short time that it was not that. In April of this year he was finally diagnosed with MSA (Multiple System Atrophy) which is a rare neurologic disease. It took him much faster than we all hoped.
He is survived by his wife, Lori Ann Anderson (Finnick); and he and his first wife's three
children, Dana Kathryn (Tyson) Bossow, Jeffrey Jack Anderson, Andy Jack Anderson, and his two beautiful grandchildren (from Dana and Tyson), Tatum (4) and Blaketon (8 mo.); and his sister, Peggy Anderson; and brother, Tim Anderson.
He is preceded in death by his wife Renee Dana Anderson (Spencer) and his father and mother, Wallace (Wally) Melanchthon Anderson and Cleo Evangeline Anderson (Swenson).
A Celebration of Life in both Loveland, CO, as well as Spearfish, SD, is to be announced at a later date in the papers and social media when all can be close and hold on to each other, to laugh, to cry, but most of all, to remember an amazing man.
In lieu of flowers, please donate to the cause of MSA. You may access their website at https://www.multiplesystematrophy.org/msa-donation/msa-memorial-donations/ then click on "View Our MSA Angels Memorial Pages," then click on "Donate to a Fundraiser" and look for the team of Dr Jack Anderson Memorial. Another option is to donate to Hospice of the Northern Hills, 1440 N Main Street, Spearfish, SD 57783.
Jack always said, "Life is about Friends, Family, and stories!" and he was FULL of them! Well, we're all waiting in anticipation to hear your story, Jack Anderson, about when you got to meet our Jesus! We know you offered him a cold beer and you deserve to be peaceful and at Home! On to the best Chapter of all!... Ride on home to Jesus our beloved Jack Anderson! We love you and will never forget you!,..."If I don't see you here I'll see you There!"
Read Less

There are no events scheduled. You can still show your support by sending flowers directly to the family, or planting a memorial tree in memory of Dr. Jack Allen Anderson.
Plant a Tree

We encourage you to share your most beloved memories of Dr. Jack Allen Anderson here, so that the family and other loved ones can always see it. You can upload cherished photographs, or share your favorite stories, and can even comment on those shared by others.

Posted Oct 01, 2020 at 07:49pm
Such great neighbors. Such a sad loss to us all on our hill. Hugs and deepest condolences to Lori and families
Comment Share
Share via: 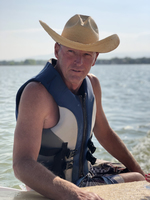