To share your memory on the wall of Lucille (Hayes) Bennett, sign in using one of the following options:

To send flowers to the family or plant a tree in memory of Lucille (Hayes) Bennett, please visit our Heartfelt Sympathies Store.

We encourage you to share your most beloved memories of Lucille (Hayes) Bennett here, so that the family and other loved ones can always see it. You can upload cherished photographs, or share your favorite stories, and can even comment on those shared by others.

Posted Mar 13, 2020 at 02:11am
I am sorry to hear of Lucilles passing.the boys stayed with Nick and I while they went to high school. Lucille and I had lots o f visits.
Comment Share
Share via:
KB

Posted Mar 12, 2020 at 10:46am
Mildred and family, I am sorry for you loss of your mother it is a very hard to go though. But just remember all the love she had for you and now she in a beautiful place. she will be with you for ever in your hearts. Prayers and god be with you. Gary and Karla Berglund
Comment Share
Share via:
FM

Posted Mar 11, 2020 at 10:36am
Our sincere sympathy to the family im sure she will be dearly missed .Our thoughts and prayers go with you all.
Faye Mutchler
Comment Share
Share via:
EJ

Posted Mar 10, 2020 at 07:22pm
While working today I have reflected on so many beautiful memories of Aunt Lucille. I dearly loved this precious lady. While growing up we often stopped by on Sunday afternoons on our way home from having Sunday dinner with Grandpa & Grandma Goodwin. Aunt Lucille would serve cream puffs and they were pure heaven. I always loved the time we spent together playing games or cards. My heart is happy though as she is in heaven with Jesus and Uncle Wilbert and our many loved ones.
The celebrating that is going on must be incredible!! I will be forever grateful for our family. Sending my love and prayers to all.

Posted Mar 10, 2020 at 05:37pm
Our sympathy to all of Lucille's family. Lucille was always ready with a smile and a hello, she would visit with the young, same age or the old folks. We are thankful for all the Boneita Picnics thru the years, getting to learn about the past and it was uphill to school both ways. The Arnold and Elsie Matt kids have a lot of 4-H memories with the Bennet families, Arnold grew up with the Hayes family, so there were lots of stories to tell. Thinking of you all.
Comment Share
Share via: 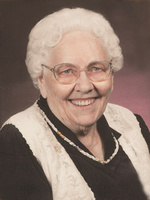 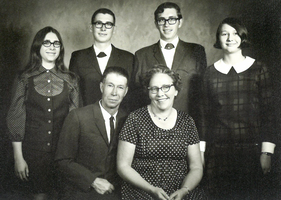