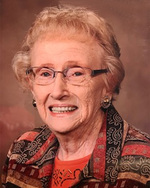 Laverne was born May 8, 1923, to Albert and Ida (Flolo) Ellingboe on the family farm in Sunburg, MN. Both of her parents died when Laverne was very young, so she was raised by her Grandma Flolo. She graduated from Brooton High School in 1941. She moved to Minneapolis where she worked at an auto parts store and later met the love of her life Roy. He had just returned home from World War II.
She married Roy Peterson on July 19, 1946. They lived in several locations across Minnesota and North Dakota before moving to Huron, SD, in 1956. They were blessed with 4 children, Nancy, Kathryn, Barbara, and Thomas. In 1979, they moved to Black Hawk, SD, and later Rapid City. After the passing of Roy in 2001, Laverne continued living in her apartment in Rapid City where she enjoyed socializing and having coffee with all the residents. She enjoyed quilting, sewing, knitting dishclothes and making lefse. She could speak Norwegian and would often recite the Norwegian prayer she was taught as a child. She was very proud of her Norwegian heritage. Roy was Swedish and they enjoyed the rivalry of the better nationality.
The past four years were spent at Aspen Grove Assisted Living in Sturgis where she was cared for by a loving staff. Even with her dementia she always said “this is a good place.”
Laverne Adelaide (Ellingboe) Peterson passed away on September 2, 2020, at the hospice care unit in Sturgis SD.
Laverne is survived by her four children, Nancy (Stephen) Vaughn, Kathryn (Kenneth) Chapman, Barbara (Gary) Reimer, and Thomas (Christine) Peterson: five grandchildren, Cristina (Hanni) Eid, Lucas (Amber) Peterson, Cody ( Katie) Peterson, Ryan (Sarah) Reimer, and Jared (Sarah) Reimer; and eight great-grandchildren, Malik Sinclair, Rylee and Sophia Reimer, Aidan and Olivia Peterson, Brinley and Brody Peterson, and Emmitt Reimer.
She is preceded in death by her parents, her sister and brother in law, Charles and Frances Gastinger; brother, Chester Ellingboe, and her husband Roy.
Visitation will be 1:00 p.m. to 3:00 p.m. Sunday, September 6, 2020, at Kinkade Funeral Chapel in Sturgis, SD.
Funeral services will be 10:30 a.m. on Monday, September 7, 2020, at Kinkade Funeral Chapel in Sturgis, SD, with Pastor Eric Thone officiating.
Interment will be at Black Hills National Cemetery at a later date.
A memorial has been established.