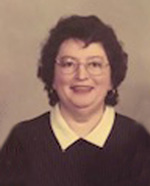 Linda Marie Harris was born October 3, 1946 to Ray and Verla (Cushing) Torres in Deadwood,
South Dakota. She attended school in Lead, graduating from Lead High School in 1964. She
continued her education at Black Hills State. While commuting back and forth to college she
met Eddie at his business, Harris Standard Station in 1966.
Eddie and Linda had a love at first sight relationship, they met October of 1966 and were
married December 31,1966, this way he could never forget their anniversary. After they were
married they lived in Lead. They were excited to add to their little family a son, Timothy Ray
was born December 17, 1967, but unfortunately their excitement turned to heartache when he
was stillborn.
They moved to Arizona and in July 16,1970 they welcomed their son Mark LeRoy
to their family. In 1971 Eddie and Linda moved to Colorado and started their own painting
business. The pull of South Dakota was too much and they moved back to Spearfish in 1980.
LInda was a diverse lady when it came to employment, she was a ski instructor, worked in
sales, factory worker, personal chef, teacher, and finished her life off doing what she loved
most, being a housewife and grandma. Her grandchildren were what brought her joy, she even
spent her last evening with them just listening to them.
LInda passed away September 3, 2020 at Monument Health in Spearfish.
Anyone who knew Linda knew she always had a story to tell. When asked what is your favorite
memory or story about Linda this is what was said: she was always there if you needed a hug,
recipe, or something cooked. She will always be remembered by a quilt she made a young
couple for their wedding and it remains on their bed still today! Her indian tacos will never be
forgotten. She was selfless; she helped so many that may not have graduated otherwise.
Linda is survived by her husband of almost 55 years, Eddie Harris (Spearfish), son Mark (Alicia) Harris, grandsons Michael and Jaxson Harris (Whitewood). Her long time friends Shirley McCary and Deanna Bowman both of Spearfish, numerous other family and friends.
She was preceded in death by her parents, Ray and Verla, son Timothy Ray, Her in laws Alfred and Marie, and her grandparents.
Graveside Committal services will be 4 p.m. Wednesday, September 9.