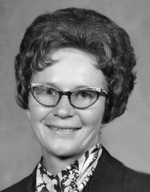 Margie (Hohnstein) Jeffery was born July 29, 1926, to Henry and Amelia (Reitz) Hohnstein in Mitchell, NE. She died June 5, 2020, at Monument Health Hospital at the age of 93.
She graduated from Vale, SD High School in 1944. After graduation, she married William “Bill” Jeffery and they worked and resided on the family ranch east of Sturgis for many years. She also worked at the Ft. Meade VA Medical Center for over twenty years in Building Management. Following her husband’s death, Margie moved to Sturgis. After retirement from the VA, she returned to her home on the ranch. Later years necessitated her move to Morningstar Assisted Living in Rapid City where she resided until her death.
She is survived by four children, Billy (Larry) Burditt, Les (Teddie) Jeffery, Mitchell (Maureen) Jeffery, and Carole (Dick) Schaffan; numerous grandchildren and great-grandchildren, whom she adored; and one sister, Janet.
Margie was preceded in death by both parents; her husband, Bill; infant daughter, Renee; four siblings; and two infant great-grandsons.
Under the circumstances, a private family service will be held.
A memorial fund, in Margie’s name, has been set up to St. Jude’s Hospital.