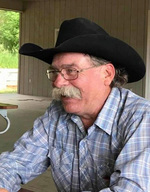 Marvin Dale Remington was born in Sturgis, SD, on November 16, 1954, to Cecil and LaVonne (Hanzlik) Remington. He died May 28, 2020, at his home near Fairpoint, SD. Marvin grew up on the family ranch learning to be a hard worker, hating being in the hay field because of his hay fever, and loving the horses, especially our little, gray horse, Velvet.
He graduated from Sturgis High School in 1973. He joined the Army National Guard and went to basic training at Ft. Leonard Wood, MO. Many job opportunities led him across the country with stops in Tennessee, Oklahoma, Texas, Arizona, Colorado, Montana, Nebraska, Wyoming, and eventually back to the ranch in South Dakota.
Marvin loved rodeo and the camaraderie of the rodeo life. He spent several years clowning and fighting bulls at these rodeos. Over the years, he had several vocations, including, but maybe not limited to hunting guide, camp cook, oil field hand, stage coach driver, steel building constructor, ranch hand, feed lot worker, truck driver, volunteer fire fighter and look out, brand inspector, and boot and men’s clothing salesman.
In 1996, he opened R&R Boot Repair in Rapid City, eventually moving it to an old school bus on the home ranch. Also in 1996, his pride and joy, Katie Lou, was born. You have never seen a prouder father. “Squirt” brought so much joy to his life as well as to the rest of the family.
For many years, he wrote cowboy poetry as a way to express himself, maybe influenced a bit by his Uncle Ray. He loved keeping in touch and reminiscing with his friends and spent countless hours on the phone doing so.
Those left behind in this world include his daughter, Katie; sisters, Aneita (Donald) Henry and Adele (Terry) Van Zee; brothers, Galen (Nancy) Remington and Gary (Roxanne) Remington; and nieces and nephews that he loved dearly.
Marvin was preceded in death by his parents and his niece, Paula.
A private family service will be held on Friday, June 5, 2020, at the Fairpoint Cemetery with Pastor Harold Delbridge officiating.
Memorials will be established for Rainbow Bible Camp and the Fairpoint Volunteer Fire Department.