To share your memory on the wall of Michael \"Mike\" James Ragatz, sign in using one of the following options:

There are no events scheduled. You can still show your support by sending flowers directly to the family, or planting a memorial tree in memory of Michael "Mike" James Ragatz.
Plant a Tree

We encourage you to share your most beloved memories of Michael "Mike" James Ragatz here, so that the family and other loved ones can always see it. You can upload cherished photographs, or share your favorite stories, and can even comment on those shared by others.

Posted Jun 20, 2020 at 04:02pm
Sherry,
So sorry to hear of Mikes passing. I always enjoyed joking around with him when he came in the pharmacy in Deadwood. He always made me smile. Roxanna Bausch
Comment Share
Share via:
HS

Posted Jun 20, 2020 at 01:14pm
Dear Sherry, We are so sorry to hear about Mike. Praying for peace for you and your family. With love, Cynthia and Michael Trucano

Posted Jun 11, 2020 at 08:41am
Our thoughts and prayers are with you at this trying and sad time. Working with Mike brings back fond memories. Frank & Nancy Maynard
Comment Share
Share via:
ML

Posted Jun 10, 2020 at 07:48pm
Sherry and family,
I am so sorry to hear of Mike's passing. He was one of my favorite people from Deadwood. I remember when a neighbor lady ran over our dog when I was a kid and he gently took our injured dog and assured me that my dog would not suffer anymore. He was so nice to my friend and I when we grew up and needed a ride to Lead to retrieve a vehicle. He gave us a ride in the Deadwood Police car. I have seen him over the years in the grocery store and he had never forgot who I was. Such a nice guy. My thoughts and prayers are with you and your family.

Posted Jun 10, 2020 at 04:56pm
Sherry and family, So sorry to hear of your loss--our hearts go out to all of you. I know Julie is taking care of Mike like you said in your text to me Sherry...sending you strength and prayers for a time when you need all you can get of both. Love to all of you from all of Julie's family. Vicky Barrett
Comment Share
Share via: 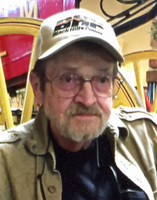