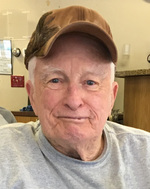 Richard “Dick” Edwin Stephan was born on March 15, 1930, in Oak Park, IL, to Edwin and Dorothy (Southerland) Stephan. He grew up in the Chicago area, where he spent many hours at a local stable and dreamed of owning a ranch out west one day. Dick spent 4 years in the US Navy during the Korean War. He was an Aviation Machinist’s Mate and served on the USS Leyte, an Essex-class aircraft carrier.
Dick moved to Fort Collins, CO after leaving the Navy, where he met and married Carol Koch. He served on the city fire department until he retired in about 1981. One of his favorite pastimes was being a member of the Larimer County Sheriff’s Mounted Patrol, where he participated in search and rescue duties in the Rocky Mountains, as well as ropings and other social events. He also loved his guns and spent many hours at the rifle range, as well as reloading ammunition. While his four daughters were growing up, he was a big supporter of their equestrian competitions and other activities.
Later in life, Dick relocated to Phoenix, AZ, where he spent many satisfying years. He was an active member of the Elks Lodge, and was often found helping at their frequent events. Dick was also a long-time member of the American Legion. He was very talented at leather craft and enjoyed making special wallets, belts, and other items for family and friends. Dick had a horse for a few years while in Phoenix and enjoyed playing polocrosse.
While in Phoenix, Dick realized his need to have God be a part of his life. He realized he was a sinner in need of salvation and forgiveness of sin that only Jesus Christ could provide. He regularly attended Calvary Community Church in Phoenix. A few weeks before his death, Dick reaffirmed his trust in Jesus.
Due to his failing health, Dick moved to the Monument Health Long-Term Care in Sturgis, SD in 2015. His family would like to thank the staff for the excellent and loving care he received while he was a resident there.
Dick Stephan, 90, of Sturgis, died on September 7, 2020, at the Monument Health Long-Term Care facility in Sturgis, SD.
He is survived by his daughters, Linda (Paul) Marrs of Whitewood, SD, Lisa Stephan of Colorado, Karen Stephan of Washington, and Jane Stephan of Virginia; grandchildren, Kay, James, and John Marrs of Whitewood, SD; and cousin, Shirley Romo of Louisville, KY.
He was preceded in death by his parents and second wife, Diane.
A committal service will be held at the Black Hills National Cemetery at 1:00 p.m. on Friday, September 11, 2020.
A memorial has been established to the Gideons International.