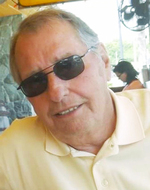 Robert William Strand passed away Saturday, August 8, 2020, with his daughter and son at his side.
Robert “Bob” was born August 7, 1942, to Betty and Everett Strand in Grand Rapids, MN. He lived in Grand Rapids, MN through his teens and early twenties, until he married the love of his life, Alanna M. Dahlgren on April 11, 1964. With Alanna, they raised two children, Dena and Brad.
Bob embarked on a career in the U.S. Army for the next 30 years, receiving the rank of Sergeant Major. During this time, he fought in the Vietnam War, where he received a Purple Heart. He was also deployed to Korea, spent time as a Drill Sergeant in Fort Knox, KY, and was stationed all over Europe and the United States. He mostly spent time overseas in Germany. While in Germany and other duty stations, he always enjoyed spending time with his family and friends, and his Friday night dinner dates with his wife, Alanna. Even though the military was always his first priority, his family was a very close second. For this, we always saw him as an exceptional man, father, and grandfather. Words cannot express his devotion, love, and sacrifices for his family, military, and country.
Upon retiring from the Army in 1989, they settled in Lacey, WA. Bob went back to school and got his certification and worked as an HVAC technician for several years. He witnessed the marriage of his daughter, the birth of his first grandchild, and saw his son graduate college. He also spent a great deal of time on his one and only true hobby in life: building black powder rifles and participating in mountain man era rendezvous.
They stayed in Washington for 10+ years before they decided to retire to Herreid, SD. We kid, but we think their dislike for the Pacific Northwest rain, moss, and pine needles got to be too much for them. They both wanted to retire somewhere closer to family with an easier pace of life and better weather. While in Herreid, he worked for a few years as a general handy man in town and surrounding farms, and eventually fully retired a few years later. Shortly in to retirement, Bob and Alanna packed up their motor home and spent the better part of most winters in Florida, and would come back to Herreid in the spring and summer. While in Florida, they spent most of their time playing golf, visiting family, and spending happy hour with their friends in the park. On their return home to Herreid, they would often detour and visit family in Minnesota, California, and Washington State. He continued building guns, riding his Harley, and spending as much time as possible with the love of his live, our mother, Alanna. This lasted until mom got sick.
She was his entire being and purpose in life. Upon her passing, he tried the best he could, but just couldn't move on without her. Losing her was too much for him, and he simply couldn't function without her. He died of a broken heart.
Bob is survived by his daughter, Dena (Tim) Strand, Sturgis, SD; son, Brad (Amy) Strand, Centralia, WA; grandson, Marcus (Misty) Iverson, Lacey, WA; granddaughter, Camryn Althauser, Mountain View, CA; great-granddaughter, Jesslyn Iverson, Lacey, WA; great-granddaughter, Zoey Iverson, Lacey, WA; sister, Susan (Mac) McMahan, Two Harbors, MN; sister-in-law, Marilyn Hahne, Grand Rapids, MN; sister-in-law, Gayle Nelsen, Hermantown, MN; and many nieces and nephews.
Our dad's details, achievements, traits, values, and lasting impressions cannot be simply written in a few paragraphs or pages. He deserves more for who he was, what he has accomplished, and what he means to us. He deserves to be memorialized in a way that does justice to his life and legacy. He is, and means, so much more to all of us. Dad, we love you. We will never forget. We will carry you with us to the end.
Private family committal services for both Alanna and Robert will be held on Thursday, October 15, 2020, at Black Hills National Cemetery, with military honors taking place for Robert.