To share your memory on the wall of Sally A. Allen, sign in using one of the following options:

Provide comfort for the family by sending flowers or planting a tree in memory of Sally A. Allen

To send flowers to the family or plant a tree in memory of Sally A. Allen, please visit our Heartfelt Sympathies Store.

Print
Graveside Service to be held at a later date

We encourage you to share your most beloved memories of Sally A. Allen here, so that the family and other loved ones can always see it. You can upload cherished photographs, or share your favorite stories, and can even comment on those shared by others.

Posted Mar 05, 2020 at 09:25am
Sally, and all the Cash family, is certainly a big part of my childhood memories. We lived in each other's homes and yards, our Dads both worked at the sawmill and our Moms did laundry together often. I haven't seen Sally in years but I am sure she would have had a story or joke to share if I had.
Comment Share
Share via:
WM

Posted Mar 04, 2020 at 12:34pm
Lynn and Lisa, I am sorry to hear of your mothers passing. What a great lady. She did have her work cut out for her raising you two girls. She will be deeply missed.
Comment Share
Share via:

Posted Mar 03, 2020 at 11:46pm
Kacee and Family,
My Deepest Sympathy. Keeping all of you in my thoughts. Sally was always a joy to be around. Her smile was contagious. I loved visiting with her. She will be missed.
Comment Share
Share via: 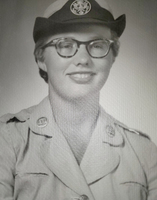