To share your memory on the wall of Viola “Vi” Oceana Crane, sign in using one of the following options:

Grief never ends…
But it changes.
It’s a passage,
Not a place to stay.
Grief is not a sign of weakness,
Nor a lack of faith,
It is the price of Love.

At Viola’s request there will be no funeral service and she will join her husband, Claude, at Black Hills National Cemetery at a private family interment.
Read Less

We encourage you to share your most beloved memories of Viola “Vi” Oceana Crane here, so that the family and other loved ones can always see it. You can upload cherished photographs, or share your favorite stories, and can even comment on those shared by others.

Posted Mar 23, 2020 at 12:24am
I will with all my heart miss my grandmother. As her oldest granddaughter I will always cherish our times together whether iit be bowling together and traveling to the national tournament , wall papering or just spending time together. Grandma always had the greatest sense of humor and fun was had by all. Great memories of all the thanksgiving dinners at her house and all the Christmas eves at mine!! So many wonder and fun memories!! She will be greatly missed and loved forever.

Posted Mar 17, 2020 at 12:38pm
Rob and Connor - I am so sorry to hear of Vi's passing - she was such a great woman and will be deeply missed. My thoughts and prayers are with you.
Comment Share
Share via:
RG

My condolences to Aunt Sis’ family. A very lovely obituary for her. Ive heard of Aunt Sis from my Whole life from my aunts, uncles and mom as they spoke of their aunt. I was happy to finally meet her a couple summers ago and enjoyed our visit with her. May you Rest In Peace lovely lady you will be missed. 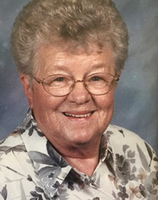